Haim Cohn was past Chief-Justice of the Israeli Supreme Court and author of The trial and Death of Jesus, has raised a number of inconsistencies with what should have happened at that time with the Jewish jury system.

I can see that they would normally meet during the day, but there isn’t a problem with them doing this, when you consider that the Jewish religious leaders were so concerned about pushing the trial through and having Jesus executed before the Passover.

If they had held an ‘official trial’, it would have been carried out after the Passover and the leaders would have thought that there was a danger of it being disturbed by the crowds who thought Jesus was the Messiah.

2. According to Jewish legal practice, no person may be convicted on his own testimony or on the strength of his own confession.
Nor may a person be convicted of a capital offence upon the testimony of two witnesses.
In addition, at least two witnesses to the crime are required to warn the individual who is about to commit the transgression that the act that he is about to commit is a criminal offence and the penalty that is prescribed for committing such an act.
It is therefore, very stringent for a governing body to convict a person of committing a capital offence.”

That is the way an honest and fair trial should be conducted, but the religious leaders were not behaving logically and they were allowing their hatred of Jesus to cloud their minds.
In John′s Gospel we can see what ‘impartial judges’ these leaders were going to be!

Then the chief priests and the Pharisees called a meeting of the Sanhedrin.
‘What are we accomplishing?’ they asked. ‘Here is this man performing many miraculous signs.
If we let him go on like this, everyone will believe in him, and then the Romans will come and take away both our place and our nation.’
So from that day on they plotted to take his life.”

Do judges make up their minds to who is guilty and what the sentence will be, before they have heard the evidence?

3. It was mentioned earlier that the offence of blasphemy was highly unlikely due to the nature of the crime itself.
Jesus probably did not have the knowledge of knowing Gods ineffable name.
Therefore, he could not have possibly been convicted of an improbable crime.
Jesus was probably arrested and crucified by the Romans who occupied Judea because he was a political dissident who was a rabble-rouser.
His punishment, crucifixion, was a popular form of punishment for such a crime.
The actions of Jesus were just as much a crime against the Roman state as it was against the Jewish state.”

The only person to know God′s Name was the High Priest, so the argument here is, how could Jesus have blasphemed God′s Name if He didn’t know it?

Haim Cohn believes that there wasn’t a problem with Jesus calling Himself a son of God, because all the Jews believe that they are.
But what is overlooked here, is that Jesus didn’t say that He is ‘a son of God’:

The high priest said to him,
‘I charge you under oath by the living God: Tell us if you are the Christ, the Son of God.’
‘Yes, it is as you say,’ Jesus replied. ‘But I say to all of you:
In the future you will see the Son of Man sitting at the right hand of the Mighty One and coming on the clouds of heaven.’
Then the high priest tore his clothes and said,
‘He has spoken blasphemy! Why do we need any more witnesses? Look, now you have heard the blasphemy. What do you think?’
‘He is worthy of death,’ they answered.
Then they spit in his face and struck him with their fists.
Others slapped him and said, ‘Prophesy to us, Christ. Who hit you?’”

Also Jesus quoted words from Daniel which is speaking about the coming Messiah (or Christ) and the people questioning Jesus would have known what He was implying.
The verses from Daniel are here:

In my vision at night I looked, and there before me was one like a son of man, coming with the clouds of heaven.
He approached the Ancient of Days and was led into his presence.
He was given authority, glory and sovereign power; all peoples, nations and men of every language worshipped him.
His dominion is an everlasting dominion that will not pass away, and his kingdom is one that will never be destroyed.” 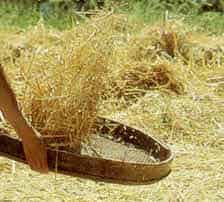