Joe’s Journal 1940
No diary this time: mid morning, Tuesday, September 25th, 1940.
Pale blue sky, streaked with Mares Tails (Cirrus). This was a WW2 dogfight unfolding before my eyes.
At the age of ten, WW2 scenes are vivid and memorised forever, but not the date, which is researched from books.
The location: West Wiltshire.

At the sound of the siren, we all dispersed from school hut to a row of cottages, four boys to each house.
Our hostess always gave us a pack of playing cards, installed us under the stairs and carried on.
I lost two games, then interest and escaped into the garden.

The droning was not British!
A quick scan and I became pack leader on spotting them: twenty plus Dornier 17’s, heading for Bristol.
Beautiful blue undersides paled into the matching autumn sky, but black crosses stared from the wings.

Crackle of gunfire revealed just three Hurricanes weaving around and between; (probably 87 Squadron).
Definitely not fair!
Feeling of anger and injustice!

More gunfire, drowned by my triumphant yell: “Eee … ees gottim!”
The pack followed my finger.
Smoke trailed from the starboard engine as it banked away, down clear of the formation.
None too soon, four black dots fell out and below, but three parachutes opened.
Triumph faded to silent sadness – (that ain’t fair either) and compassion – (hope it’s quick for him).

In spite of strict security, the word got around.

His landing was a half built stack of new hay.
He asked someone to ease his belt – and lived for another hour or so. “Forgive us our trespasses, as we forgive those …” I did immediately!

The last enemy to be conquered is death”

The books and pictures that sourced my schoolboy aviation ‘expertise’ have long gone, but I still have the Bible that shared their box.

Politicians promise it won’t happen again; historians insist it will – forgive them also.

This autumn, forgive the trainee pilots their engine noise and remember the ‘few’, but an enemy’s onslaught is a real test of our Lord’s Prayer.

Let those of us old enough to remember, give thanks for the ‘few’ who gave all; those of us too young, spare a thought, or better still, a prayer for the future ‘few’, yeah, even as they disturb our siesta! 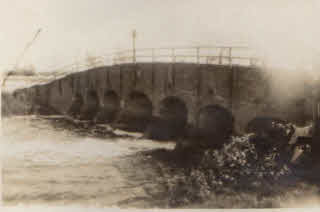 Here is a picture of the Earith Suspension Bridge -…
Read More