Souvenirs from East Africa, these wooden figures were collected mainly from Tanganyika – now Tanzania, during the early 1950’s.

Most were bought at stations on the Central Railway Line – some costing less than a cup of tea in the dining car.

They were carved by young men trained in, or resident at, church mission workshops; in those days their only hope of any education or trade / craft training.

Half a century later, the figures show no tendency to warp or split.

This group of 3 figures are made from a lightweight softwood, initially ‘Tea Rose’ coloured – darkening with age – an effective base for hot poker work and none of them polished.

This is a Leopard stalking.
The African Leopard spends a lot of time resting in trees. It is nocturnal and doesn’t mind swimming in rivers.

Two warthogs – both by different craftsmen.
Warthogs have four bumps (warts) on their head.

African Hares can leap about 10 feet into the air.
They do not live in burrows. The African Hare is smaller than it’s English cousin. 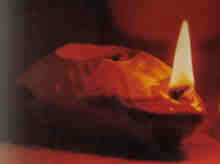